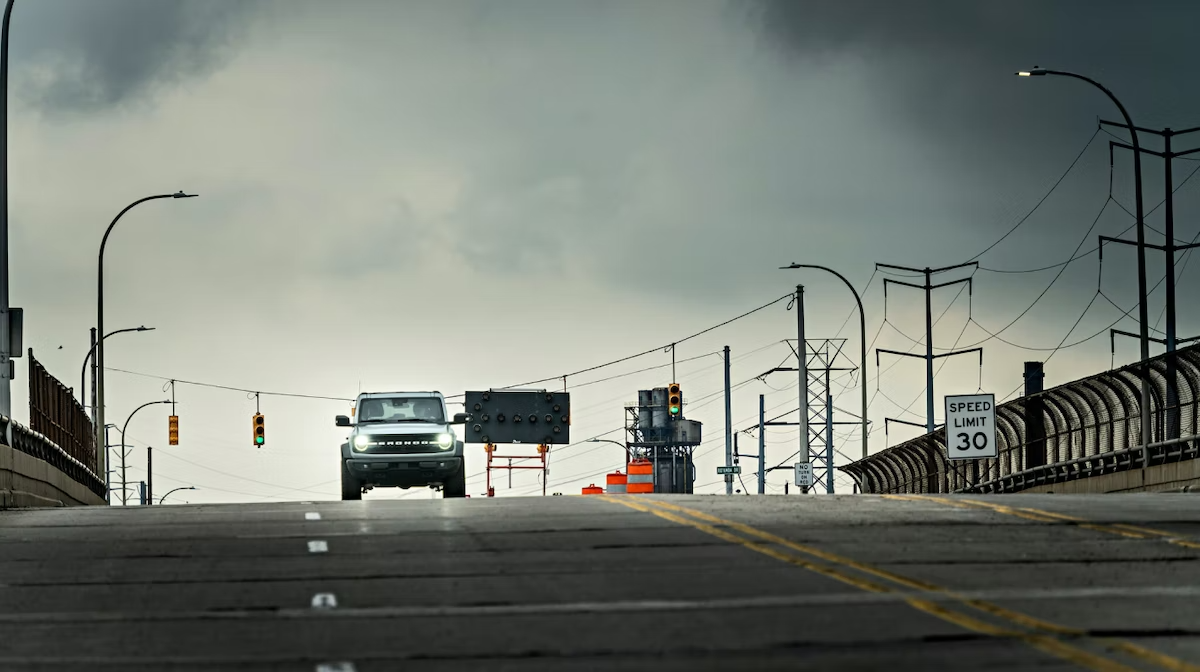 Considered the most brutal and poorest big city in the USA, Detroit has reinvented itself (once again). A journey from the past to the future, through the highs and lows of the automobile industry.
#Car#ramp#USA#Detroit

Detroit, early January 1987. It is snowing and snowing and bitterly cold. Mayor Coleman Young opens the first North American Auto Show, organised by the local dealer community with casual support from the exhibiting manufacturers. The premiere flops, as the recession has the city firmly in its grip. Bad times for the Big Three, whose exhibits are hardly shown to advantage in the huge, poorly lit Cobo Hall. We count two show cars: Chevrolet Express and Oldsmobile Aurora Aerotech. Fifteen years later, 17 concept cars vie for more than 300,000 visitors. There’s no question about it: downfall and upswing go hand in hand between Lake St. Clair and Lake Erie.

Hardly any other car manufacturer has experienced and suffered through the roller coaster of success as intensively as Ford. In mid-September 2022, the seventh generation Mustang made its debut: old world V8 reinterpreted with tried and tested set pieces. At the same time, orders for the all-electric F-150 Lightning are going through the roof. Instead of 20,000 as originally planned, 150,000 units are now to be produced per year. Not just anywhere, but at home in Detroit, right next to the historic River Rouge complex, where Henry Ford launched the Model T in 1908 and the history of Motown began. On the dewy F-150 line, the present and the future run side by side: big-block eight-cylinder and 585 hp electric power.

Eric works in Team Lightning, earns 25 dollars an hour, almost 40 per cent above the standard rate, and has fun trying to beat the specified cycle time of 53 seconds. Eric and his colleagues work profitable overtime plus weekend shifts, thanks to the Lightning. But not thirty miles to the west, Ford recently closed another old plant in Ypsilanti and threw the workforce out the door. Instead, the family prefers to invest in Kansas and Tennessee, where new stimulus money beckons. Only for the Henry Ford Museum, the company headquarters and the development centre does Detroit remain the hub of the car world.

Back in the winter of 1987, we put up for $80 a week at the Waterbed Motel in Inkster, halfway between Arby’s and a gas station, where a few days later someone was arrested for shooting a travelling salesman just two rooms away at night. Also on the weekend of 27-28 August 2022, the press reported three violent crimes resulting in death. Sad routine, not hot enough for page one despite the summer slump. One should still be on guard around the city centre after dark, when in doubt it is safer to talk oneself green at the red light. But Detroit has seven lives, and at least three of them are still left, and there is – once again – a gold-rush atmosphere in the City.

Even the tight corset of vacancy and wasteland that frames the few skyscrapers like the backdrop of a Cormac McCarthy dystopia is in the process of renewal. Crafts, small shops, newly created affordable housing, artists’ colonies, pop-up pubs, revitalised green spaces and even a tram line symbolise the spirit of optimism in the metropolis, which is heavily in debt to the tune of seven billion dollars.

GM had to file for bankruptcy in 2009, Chrysler only survived with state aid, and Ford has also been in financial trouble several times. Of course, it was always the others who were to blame – lax protectionism, overly strict environmental regulations, the fragile economy, the hullabaloo in Washington. First it was the Japanese carmakers who upset the Big Three with their promise of quality, then the Koreans retaliated, and now there is fear of the Chinese threat. What had happened?

The brains behind the combustion engine had neither learned from the energy crisis nor taken climate change seriously, but instead had kept their slowly dying regular customers quiet with zero-sum leasing deals and cheaply produced trucks until the bird in the hand was no longer enough to survive and the dove on the roof had long since flown away.

Fifteen years after Tesla, more than a century after the first Detroit Electric Stromer and after a glut of clueless top managers, the realisation has finally taken hold in Dearborn, Warren and Auburn Hills that the planet can only be saved with a zero-emission offensive, especially since the unimaginative and loveless product range of the American manufacturers hardly makes a dent any more. Sedans, once the insignia of recovery, are now slow sellers even in the USA. With the exception of Lexus, the premium segment is firmly in the hands of the Europeans. Alternative technologies like the fuel cell are being developed elsewhere, pick-ups are a purely American phenomenon. Quite different are the SUVs and crossovers hyped worldwide, which would be a real hit as an export developed in Detroit if – yes, if – CO2-neutral drives at least promised ethical-moral absolution.

Chrysler, Jeep, Dodge and Ram now belong to Stellantis, which pulls the emissions strings from Europe. GM is once again fighting alone against all, with the old world currently just a blank spot on the map after the break-up of Opel. Ford has experimented to the hilt, bought and divested Jaguar after Aston Martin, made a mess of the Americanisation of Sierra and Scorpio, sacrificed Mercury for Lincoln, fallen for Mazda, flirted with VW, brought Jiangling on board and briefly flirted with Rivian.