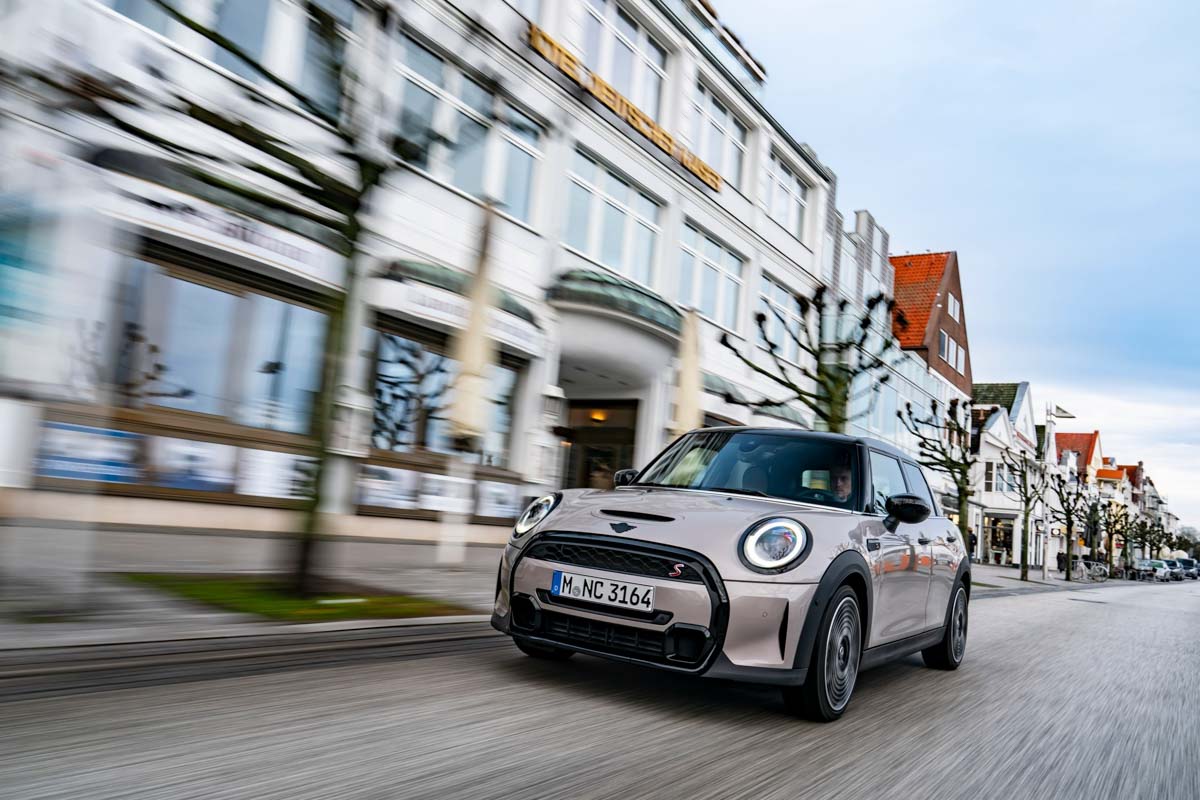 No racetrack, no disused airport, no salt lake. We have already done everything for a photo series. Now we have alternatively grabbed the MINI Cooper S 5-door to cruise to Lübeck.
#Mini#Lübeck#Advertisement

And on a trip to the old Hanseatic city and the Baltic coast, you can discover historical sites, locations of world literature and lively beach life. And yes, the most beautiful way is along winding country roads, which were once important trade routes and today provide above all driving pleasure with the MINI Cooper.

If Hamburgers are drawn to the Baltic Sea beach, they can start by following the signs to Berlin. The Autobahn 24 not only leads to the capital, but also forms the first stage for a particularly scenic route to Lübeck and from there on to the sea. After about 40 kilometres of driving through eastern Schleswig-Holstein, it’s time to switch from the modern-day expressway to the Old Salt Road, especially behind the wheel of the MINI Cooper S 5-door, which can show off its trademark agility much better on winding country roads. The historic trade route north is therefore the ideal terrain for driving fun on the way to the coast.

BEING ON THE ROAD DOES NOT MEAN BEING OUT OF REACH

The cockpit display and central instrument light up in “Sport” colour mode, the redesigned sports leather steering wheel fits perfectly in the hand, and the four-cylinder turbo engine with 131 kW/178 hp responds spontaneously to every movement of the accelerator pedal. So it’s a brisk drive past green meadows and lush fields through the sparsely populated countryside to Mölln, a small town in the Duchy of Lauenburg district surrounded by lakes. The second stop on the tour is also surrounded by lakes. Ratzeburg is also known as the island town. A few hundred steps, no matter in which direction, are enough and the visitor is already standing at the water. The town is known to sports fans for the Ratzeburger Achter. At the local rowing club, coaching legend Karl Adam laid the foundations for the German Eight, the flagship of the German Rowing Association, which has repeatedly achieved great success at the Olympic Games and World Championships since the 1960s.

The route continues along the lakeshore towards Lübeck. On the drive through Grönauer Heide, you can also enjoy the benefits of the new adaptive suspension in the MINI Cooper S 5-door. Frequency-selective damping now ensures an optimised balance between sportiness and ride comfort. The go-kart feeling typical of the brand can be felt in every bend. At the same time, an additional valve ensures extremely fast adjustment of the damping forces, so that the harmonious driving characteristics are not disturbed even by bumps in the road surface.

ON THE WAY TO LÜBECK EVERYTHING IS DIFFERENT

After a good 20 kilometres you reach the Hanseatic city of Lübeck. In the “Queen of the Hanseatic League”, as Lübeck is also called, the question automatically arises: what to see first? The old town with its narrow alleys? The corridors with the small outbuildings behind the merchants’ houses? The magnificent churches? Lübeck is part of the Unesco World Cultural Heritage and accordingly has a lot to offer. The ideal starting point for exploring the two-square-kilometre old town island is the market square by the town hall. The people of Lübeck spent 300 years building it, ultimately combining several stylistic epochs from the Gothic to the Renaissance. Right next door is St. Mary’s Cathedral with its almost 40-metre-high vault, which is still a small miracle for structural engineers. After so much high culture, the sugar level can plummet. A visit to the marzipan shop Niederegger, a specialist for this sweet delicacy, will help. Here you can discover marzipan in every conceivable variation. As a strong bar, as a confection and also as ice cream. And let’s not forget the nut and cream cake with a marzipan topping, for which gourmets will travel many a long way. If you’ve already decided on a large number of souvenirs, you’re in for a treat: There’s plenty of room in the luggage compartment of the MINI Cooper S 5-door. It holds 278 litres when all five seats are in use, and can otherwise be expanded to up to 941 litres.

WHAT IS TRAVEL TODAY? WHAT DOES IT MEAN?

The last stop on the tour is the Lübeck district of Travemünde. Just under 20 kilometres from the gates of the Hanseatic city lies the seaside resort, whose history goes back to the year 1800 and which had its heyday during the Belle Epoque. In some places you can still feel the breath of history – or is it just a light breeze from the Baltic Sea? The old Kurhaus now houses a wellness hotel, and the casino, once famous throughout Europe, is now a luxury hotel. New splendour and lively life are developing on the Priwall peninsula. The tip of the peninsula belongs partly to Travemünde and partly to Mecklenburg-Vorpommern. For some years now, the area has been completely turned inside out, a new holiday area is being built directly on the Trave, where the four-masted barque “Passat” is also moored. Apartment buildings, marinas, boutiques, cafés and restaurants form the new face of the peninsula, which also has quiet corners with the nature reserve at the Pötenitzer Wiek and some beautiful beaches. And when one of the big Scandinavian ferries sails from the Trave into the Baltic Sea, you can still feel something of the big wide world.

The MINI is full of energy and gives free rein to your enthusiasm. Combines iconic design with state-of-the-art technology. Rent the Mini now from Sixt.