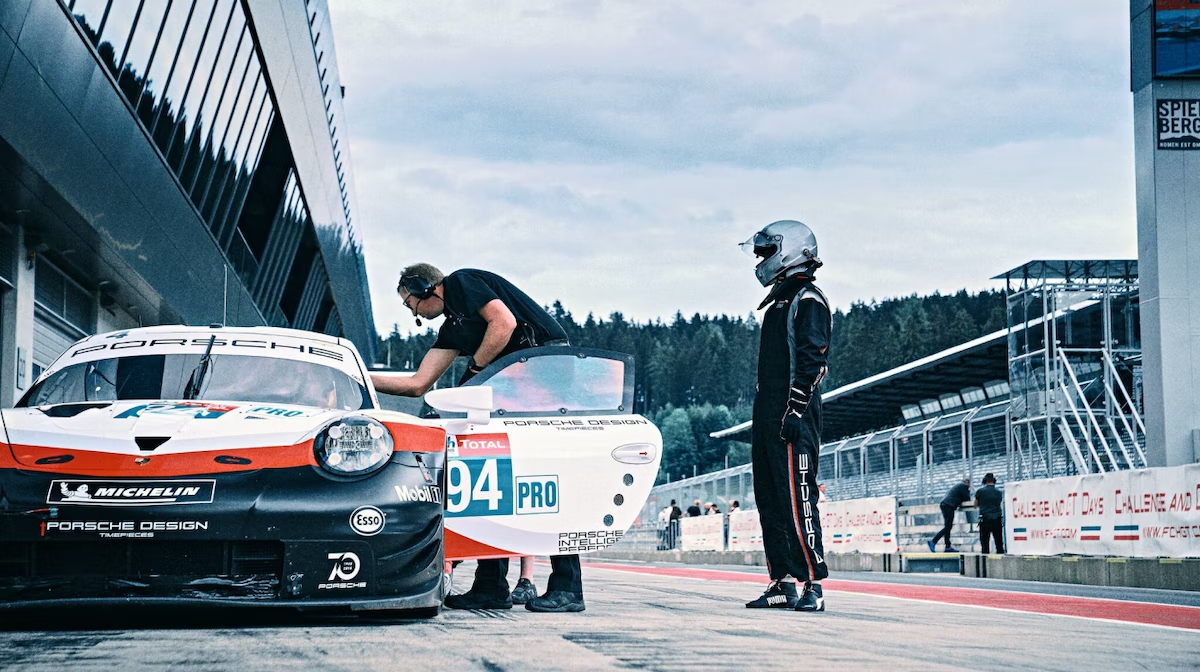 Imagine you get a phone call. You can drive ten laps each of the following four race cars at the Challenge & GTDays at the Red Bull Ring: Ferrari 458 Italia GT2, Porsche 991 RSR, Porsche 996 RSR, Ferrari 333 SP. Oh yes, the task is to prove what you're made of.
#Porsche#ramp#Ferrari#GT Days#Red Bull Ring

There are stories that are so unbelievable that you think you’re dreaming. This is one of those stories. It begins three months ago in the Ristorante Pfauen, Reutlingen near Stuttgart, Kanzleistraße 52, Apulian cuisine. Our editor-in-chief invited the editorial team and a few friends to dinner. So it was a big get-together. At our table was also a wiry and extremely likeable man in his late forties. I noticed that he listened carefully when I said something. He usually smiled mischievously. The next morning my mobile rang. It was the editor-in-chief: “I sent you an email a minute ago, look at it, that’s all I’m saying.” What I got to read couldn’t possibly be true: “You’ll be driving ten laps each of the following four race cars on 8 June as part of the Challenge & GT Days at the Red Bull Ring: Ferrari 458 Italia GT2, Porsche 991 RSR, Porsche 996 RSR, Ferrari 333 SP. And P sends you his best regards.” Attached was a photo of each car (the Porsches are, of course, 911 models – 991 and 996 are the internal type designations).

It was by no means a joke, the editor-in-chief replied, P. had raced in the past, and damn fast, and not in some Mickey Mouse series, but in the World Endurance Championship. P. had had the impression yesterday that I had put my foot in my mouth, but not with the spaghetti carbonara, but with my alleged motoring skills and various experiences in racing cars. And because P. was a man who was willing to go the extra mile and who was interested in a good story, he decided before he went to bed to get the Austrian out of his habit of being a muzzler. Let him show what he can really do in a thoroughbred racing car – but what do you mean in ONE, in FOUR at once! P. owns the Porsche 991 RSR and the Ferrari 333 SP.

An English ex-racing colleague of his is the owner of the 996 RSR and the 458 Italia GT2. Like P., the Englishman would come to the GT Days to do a few laps after a long time. In a telephone call at midnight, he assured P. that he would also make his two cars available and said that finally someone would show them where the hammer really hung. Early this morning P. then rang him, the editor-in-chief, out of bed to tell him what he was doing. (By the way, since P. is extremely media-shy, we will always call him P. until the end of this story).

And then suddenly it was 8 June. I woke up before sunrise and heard voices – two, to be precise. One was more of a voice, soft, frail, uncertain: “It will be your day, just believe in it … Hm, or not, I don’t care.” The other thunderous, ominous, unmistakable: “It will be your Armageddon!”

At night, tormenting self-doubt prevented me from falling asleep for a long time. Again and again the same questions: “Am I up to this task? And has there ever been a better opportunity for a grandiose embarrassment and a bad take-off?”

I found it hard to get up, I didn’t exactly feel rested. At ten o’clock I was at the ring. White clouds moved over the race track embedded in the Styrian mountain landscape like a flock of sheep.