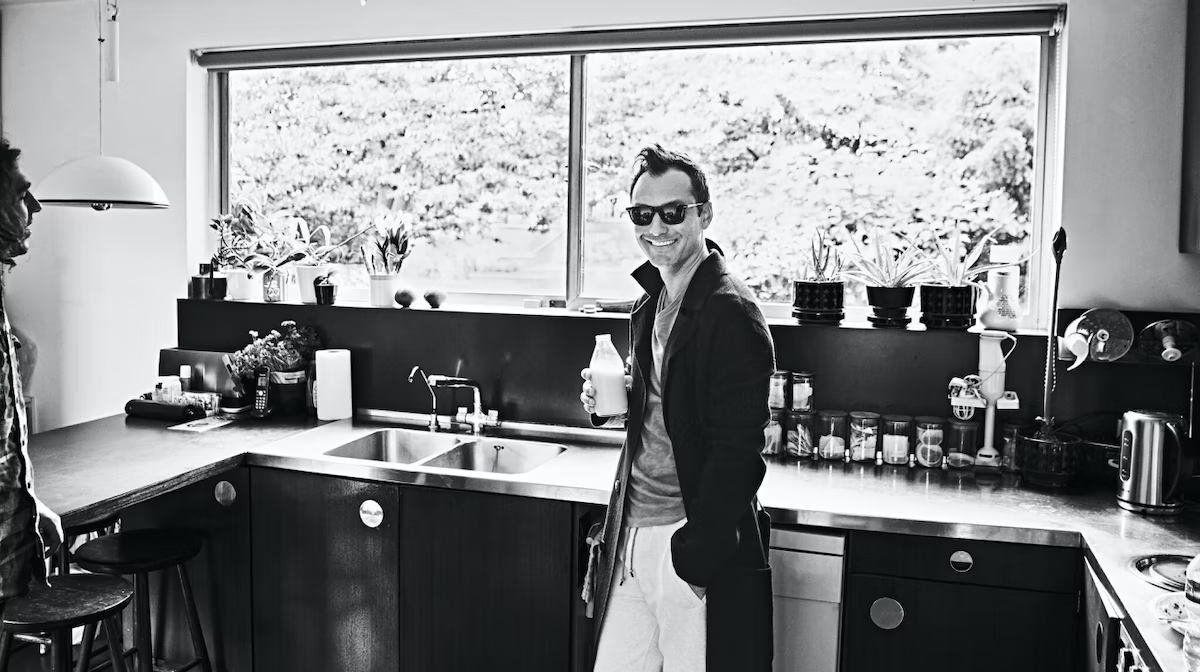 Jude Law is in the headlines - because he is now one of the star warriors. Or rather, he has recently been given a role in the soon-to-be-released Star Wars series "Skeleton Crew". But the 49-year-old was also a decidedly good conversationalist even before the announcement. Feel free to see for yourself.
#ramp#England#Jude Law#Actor

To be honest: Sometimes you have an interview with someone who doesn’t seem to be quite on the ball. But we can assure you: That was not the case with Jude Law. During the interview, the 49-year-old fixed his counterpart with a penetrating gaze. And talked openly about his personal happiness, the massive self-doubt that used to plague him and his goal of continuing to make the most of his opportunities. Jude Law has very green eyes, by the way.

“Mister Law, let’s start big: What were the moments when you felt the greatest happiness?”

“The experiences where I felt like a miracle was happening were the births of my children. Emotionally it’s absolutely overwhelming, plus the happiness when your baby is also healthy. And at the same time, a birth is something very normal that has been happening every day for thousands of years. In any case, I wish I had experienced other such miracles.”

“For many, the greatest happiness is love. As a man who, if we may touch on it, has been in many relationships, do you have a definition for it?”

“Oh, my goodness. What is love? I think it’s a question of compassion, you have to be generous towards the other person and support them. Authenticity is also very important. Always align yourself with the truth.”

“And you succeed in doing that?”

“As a rule, it is. It can sometimes be difficult to keep it up, but if you have made that decision, then stick to it. I also decided a few years ago to avoid all kinds of arguments. They cost a lot of energy. Life is so much easier when you don’t argue.”

“You got married again a few years ago, although marriage can also bring conflicts.”

“But we also thought about it carefully and waited a few years before taking that step.”

“Your marriage was definitely a happy experience?”

“Absolutely. And it was also because we involved both our families. It wasn’t just supposed to be the union of two individuals, it was supposed to be two families coming together.”

“What do you think is fundamentally important for our sense of happiness?”

“Ultimately, it comes down to doing something good for yourself, both internally and externally. And it can be very helpful for your inner life if you reduce your life. For example, by disconnecting from the media world and putting your mobile phone aside. Only in this way can we engage with ourselves and begin the journey into our soul, which is what life is ultimately about. Unfortunately, we are being bombarded with a lot of useless information. We have long known that it is not healthy to eat burgers and drink Coke every day. In another way, it is harmful if we are constantly preoccupied with the question of what some reality star eats for breakfast. That kind of thing causes brain cancer, and actually that’s much worse than when we get physically fat.”

“And what do you do for your soul?”

“I surround myself with people I love. I read a good book. I occupy myself a lot with art. That’s why I like to hang pictures on my wall that inspire me. I did that when my children were little, because I wanted them to grow up surrounded by beautiful things. I would have preferred to have something by Gerhard Richter, but I couldn’t afford it.”

“Didn’t you have enough lucrative offers from Hollywood?”

“I never wanted to make a big film just so I could earn a lot of money. That’s why I was also careful not to lead too extravagant a lifestyle. I like the freedom to do what interests me. I’d rather put a lot of time into projects that I could help develop from the beginning. When you don’t have to rely on collecting a big cheque right away, it’s incredibly satisfying.”

“How do you deal with it when your positive feeling gets clouded?”

“Fortunately, I never needed professional help. If I ever felt mentally bad, I never repressed it. As an artist, you can use that creatively. And apart from that, I was brought up with the attitude that the lows are just as important as the highs. I remember my father’s advice: “If you travel straight from A to B, it quickly becomes uninteresting. It’s much more exciting if you move from top to bottom and from bottom to top.” That’s also a good analogy for life.”

“So what are the low points in your professional life?”

“I don’t like to talk about the bad parts so much because there are so many good aspects. I lead a beautiful life and I’m lucky to be able to do a job that I love. I spend my time with wonderful people and I get to be part of films that enrich the language of cinema. And at the same time, it allows me to live a comfortable existence where I could and can raise healthy children. Of course, there are disadvantages. That concerns in particular the loss of privacy, which is unpleasant for everyone. There was a phase when I was under surveillance for four years and became downright paranoid. My phone line was tapped, my car was monitored and I was really followed. Text messages I had written were published in the News of the World newspaper until it was all exposed and the paper was shut down. That was a crazy time, but fortunately things have improved since then.”

“Do you have a problem with being adored as a star or is that more of an inconvenience?”

“I love the dialogue with the fans. After all, I’m a big film fan myself.”

Our editorial team recommends other lifestyle topics that you are sure to enjoy.

PrevPrevious PostJENSON BUTTON: LIVING IN THE FASTLANE
Next PostTechnical innovation for the best view behind the wheelNext
Promotion