DOLCE VITA AT ITS FINEST 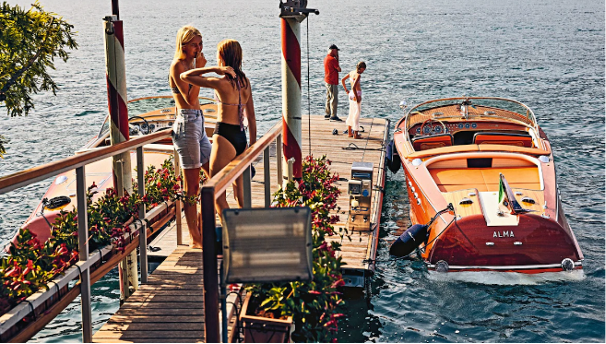 Who doesn't feel the same way? The easy life in Italy fascinates us all! Revelling in memories is one thing, but recapturing the flair in everyday life is another. For this, there is reading material of the finest: about road trip tips in the USA, about screen legends and about a motor sport icon, which is why .....
#Tip#Italy#Book#ramp#Dolce Vita#Riva Boats#Road trip#Reading

Attention Italy lovers! We present beautiful books to fall in love with.
To read for yourself or to give as a gift!

Let’s celebrate a double birthday: in 1842, the Riva boatyard was founded in Sarnico on Lake Iseo, and in 1962, the Aquarama model developed by Carlo Riva came onto the market. Gianni Agnelli was partly responsible for its success: when Riva tested the prototype in Monaco, the Fiat boss asked if he could drive the boat, took it for a spin – and the sleek mahogany runabout became the epitome of the Dolce Vita.

Sean Connery owned a boat, Gunter Sachs anyway. Today, about 650 of the 760 boats built still exist. You can imagine the prices. The homage in paper form is an idea cheaper, but still you have to look for it, because it is very, very much in demand. Michael Verdon: Riva Aquarama. Assouline. 920 Euro.

What a Way to Go!

“In the end, you know a man by what he does. Not by what he says or how blue his eyes are.” The phrase comes from director Martin Ritt, who made several films with Paul Newman. A few facts you might not know: born in 1925 in Shaker Heights, Ohio, Newman returned during World War II as the sole survivor of his squadron and dutifully continued his father’s sports business until his death in 1950. He became a superstar at the age of 38, he was nominated ten times for the Oscar, but only got it – apart from the one for his life’s work – for “The Color of Money”

Well, and then there was his salad dressing, which he turned into the Newman’s Own food empire. That he raced successfully, again, most people know. “Racing is the best way I know to escape all the garbage in Hollywood,” he once declared. Now, not only has a coffee-table book of still-unknown photos of him been published, but a six-part documentary about Newman and Joanne Woodward, to whom he was married for fifty years, directed by Ethan Hawke, has just been shown on HBOMax. In other words, there are plenty of opportunities to rediscover this extraordinary man.

News from the legend

One would think that there is nothing more to say about the Ford GT40, the car has been put through the grinder x times in pop culture and every secret has been revealed. If it weren’t for this new book, in which 32 stories are devoted once again to every detail: the design and development of the car, the racing stories and opponents, the Scuderia Filipinetti team that entered the car in Le Mans in 1965, the name controversy of 2005 or the unrecorded engine swap. You never stop learning. Good thing.

“So one day I discovered that I no longer knew my own country,” John Steinbeck wrote in “The Journey with Charley: In Search of America.” In the fall of 1960, the then 58-year-old writer embarked on a tour of America in a custom-built camper named Rocinante, named after Don Quixote’s horse. Our advice: Pick up the book, which is still hot off the press and more of a social critique than a travel novel, plus the illustrated book “The Great American Road Trip,” and hit the road.

The Great American Road Trip: Roam the Roads From Coast to Coast.
45 Euro

PrevPrevious PostBULETT TRAIN
Next PostTHE MANY FACETS OF JOYNext
Promotion