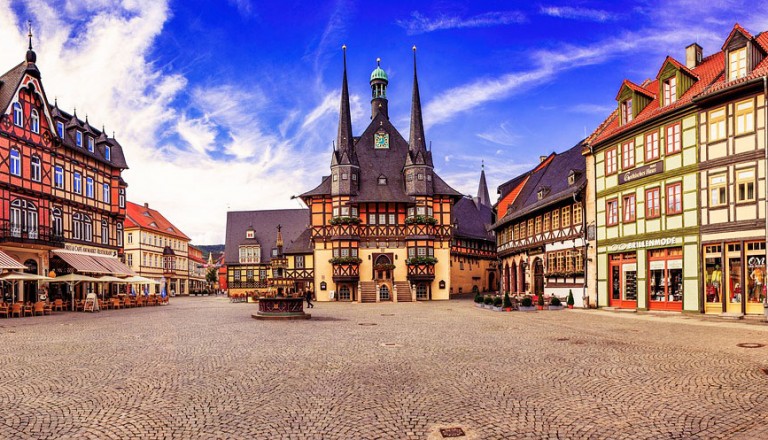 The UNESCO World Heritage Sites and their supervising foundations are important beacons in the cultural landscape of Saxony-Anhalt. As special points of attraction, they are able to provide essential impulses for the entire state and beyond.
#Germany#Tip#Saxony-Anhalt#World Heritage#UNESCO

Discover the cultural diversity in Saxony-Anhalt. The state has an extraordinarily rich cultural heritage – and one of the highest densities of UNESCO World Heritage Sites in Germany. The UNESCO World Heritage Sites and their supervising foundations are important beacons in Saxony-Anhalt’s cultural landscape. As special points of attraction, they are able to provide significant impulses for the entire state and beyond. the medieval town of Quedlinburg, the magnificent Bauhaus, in Dessau-Roßlau, the garden pond Dessau-Wörlitz the Luther towns of Eisleben and Wittenberg

The town of Quedlinburg in the Harz Mountains, with its winding alleys and medieval-style squares, is now one of the largest area monuments in Germany. With a huge stock of historic half-timbered houses, the town centre extends over almost 80 hectares. The collegiate church of St. Servatius, which towers over the city centre, is one of the most important buildings of the Romanesque period. The famous cathedral treasure is located here. Together with the collegiate church and the castle, Quedlinburg’s old town has been a UNESCO World Heritage Site since 1994.

The “Bauhaus sites in Weimar and Dessau” have been a registered World Heritage Site since 1996. At the Bauhaus in Dessau, radical new ideas about art, architecture and design were developed. Walter Gropius was at its head. He founded the Bauhaus in Weimar in 1919 and also made Dessau the centre of modernism, the city with the most original Bauhaus buildings worldwide. There are 300 of them, spread throughout the city. One of the highlights is the Bauhaus building by Gropius himself. Today, around 100,000 visitors from all over the world come here every year to see the original buildings of the Bauhaus school.

When Martin Luther published his 95 Theses against the papal sale of indulgences in Wittenberg on 31 October 1517, he set the Reformation in motion. To commemorate the world-historical dimension of the Reformation, UNESCO recognised the Luther memorials in Eisleben and Wittenberg as cultural heritage of humanity in December 1996. A total of six sites in Luther’s birthplace as well as his main place of activity in Wittenberg were included in the World Heritage List: Luther’s birthplace, Luther’s death house (both in Eisleben), the Luther House in Wittenberg, where the reformer spent around 35 years of his life, the Melanchthon House, St. Mary’s Church and, of course, the Castle Church in Wittenberg.

Monument to the reformer Martin Luther on the market square in Eisleben.Photo: epd-bild/Steffen Schellhorn

Prince Leopold III Friedrich Franz of Anhalt-Dessau had the Wörlitz Gardens – also known as Wörlitz Park – created in 1765, laying the foundation for today’s Garden Kingdom of Dessau-Wörlitz, which was inscribed as a UNESCO World Heritage Site in 2000. Today, the Garden Kingdom of Dessau-Wörlitz inspires visitors above all with its palaces and gardens. Prince Franz had almost all of them built during his 50-year reign: Wörlitz Palace, the Gothic House, Mosigkau, Oranienbaum, Luisium, Sieglitz Park and Wörlitz Park.  English-style landscape garden throughout Europe. Wörlitz Palace with the beautiful Wörlitz Park is considered the founding building of classicism in Germany.

St Peter and Paul’s Cathedral in Naumburg is considered one of the most important cultural monuments of the High Middle Ages in Germany and was inscribed as a World Heritage Site in 2018. The late Romanesque-early Gothic cathedral (built between 1213 and around 1250) is world-famous for the work of the so-called Naumburg Master. With its twelve 800-year-old stone donor figures, above all that of Margravine Uta of Naumburg, it is one of the most important buildings of the European High Middle Ages. Also worth seeing is the Naumburg Cathedral Treasure in the cellar vault, which documents the almost thousand-year history of the cathedral in all its diversity.

Donor figure of Uta of Naumburg in the cathedral, Photo: IMG/Frank Boxler

The Nebra Sky Disk is one of the greatest archaeological finds of the Early Bronze Age. The bronze plate is the oldest concrete representation of the sky in the world and can be admired in the State Museum of Prehistory. It shows the sun, a crescent moon and 32 golden stars. Because of the 3,600-year-old depiction of astronomical phenomena, it has been a UNESCO World Heritage Site since 2013. For the first time in Europe, an astronomical timekeeping instrument was available that could be used to determine dates precisely over a period of years.

The writings of the Reformation were included in the UNESCO World Documentary Heritage in 2015. They include 14 writings and letters by Martin Luther written in the early 16th century. These include Luther’s Letter to Charles V, Luther’s writing “On the Freedom of a Christian Man”, and his Letter to the Romans. These writings resulted in a surge of education and a new religious and political consciousness, and are also evidence of the expansive communication channels of the time.