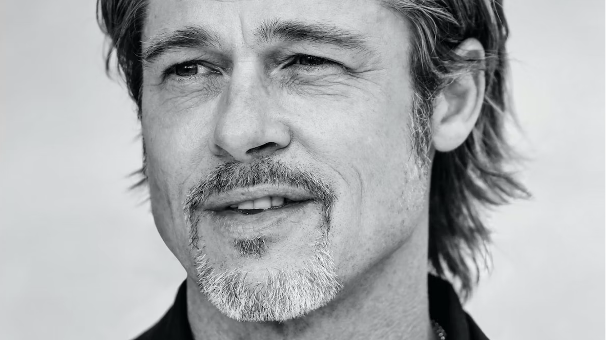 Brad Pitt: "I wear my age like a badge of honor." In his latest film, "Bulett Train," Brad Pitt plays a hit man who gets involved in a decidedly wild train ride with a happy ending. Which brought us to the question: Is Brad Pitt happy? In an interview with the 58-year-old, it becomes clear what processes of realization the actor went through - and what principle he followed to find this feeling.
#Tipp#Kino#Brad Pitt

Mr. Pitt, are films a means for your self-realization?

For me, they’ve always been a gateway to the world. I had seen almost nothing of it as a teenager, at most got around the U.S. a bit. And films showed me other cultures and ways of behaving. They were my great love. However, I never had the plan to become an actor. In my home country – I’m from Missouri – that wasn’t a career option. Near the end of college, I realized that a normal profession would not be for me. I wasn’t ready for it. And so I thought, Why don’t you follow your love and try to make movies? I dropped out of college two weeks before graduation, earned a little money so I could afford a trip to California – and took off.

And you were happy right away?

It took a while. In the beginning, I didn’t even get audition dates. But eventually I got my first opportunities, and I did everything I could to take advantage of them. Then it took me about ten years to understand exactly what I wanted. People tried to push me into television, but I stayed true to my love. And that was film. The stories that were told in the cinema – that was what I wanted. And that remained my maxim.

But it’s not natural to stay true to your principles.

What helped me was becoming a father. I am absolutely aware that one day my children will see my films. And I have to think back to what films shaped and inspired me when I was young. For that reason, I know exactly – even more exactly than before – what I want to do. My passion has even grown.

But you said that you weren’t so happy at the beginning of your career. Why was that?

I was pretty confused. I just wasn’t prepared for everything that comes with this profession. I just wanted to make movies – big movies – and I didn’t realize that it would also put me in the public eye. I lost my bearings a bit. There were interviews where the director had to hold my hand so I could get through them.

And you were happy right away?

It took a while. In the beginning, I didn’t even get any audition dates. But eventually I got my first opportunities, and I did everything I could to take advantage of them. Then it took me about ten years to understand exactly what I wanted. People tried to push me into television, but I stayed true to my love. And that was film. The stories that were told in the cinema – that was what I wanted. And that remained my maxim.

At the same time, you were a sex symbol. A critic once described you as a “character actor in the body of a screen idol”.

Which was a nice compliment. Yes, I am an actor who uses his body. But for me, completely different aspects come first: namely the story and the director with whom I tell it. And I want to discover something new with which I have a personal relationship. To do that, I was aware that I end up in a pigeonhole with certain roles. That’s why I wanted to turn my image upside down a bit and played eccentric roles like in “Twelve Monkeys” so that people would no longer pin me down to a certain type of character.

But that can also be risky. There are many actors who have played a certain type of role their entire career.

Yeah, sure, when I think of a Cary Grant, that’s true. But I wouldn’t be good at it, and it’s not my nature. I don’t think my strategy is risky, I think it’s smart. It consists of working with directors who are smarter than I am. Because they decide how the story is told.

What does that mean exactly: … that’s not your nature?

I’m someone who has to keep moving forward and can’t do the same thing. When I was in high school, I tried all kinds of sports. I played football, I was a wrestler, the next year I played tennis, then basketball. I mastered everything, but it was impossible for me to commit to one thing. The inability to repeat myself shows up even in everyday things. If I’m driving off in the car and realize I’ve forgotten my glasses or driver’s license, I still don’t turn around to get the things. Even if it only takes me five minutes. I have a blockthere.

You wouldn’t want to go back in time to be younger again either?

Oh no. I’m much happier in my old age. Yes, I have to wear glasses because I’ve become nearsighted. But I wouldn’t trade my treasure trove of experience for anything in the world. I wear my age like a badge of honor. I have become wiser and have learned to take responsibility for others. The time when I could blame my parents for problems is over. Life is much better that way.

And you’re not afraid of losing your status to younger actors?

We all have an expiration date. I’m approaching mine. I have nothing against the younger generation taking over. But I’d like to get a few more things going before I kick the bucket. Acting is too much fun for me. It’s like you’re in the boxing ring. Yeah, you’re getting hit, but you know there’s a good reason for it.

Are you afraid of anything at all?

My only fear is of death – but we all have that. It results in me being careful about my safety – and even more so about my children’s. I want everyone to be okay. This fear also influences me in my work. Precisely because I want to make films that make a difference and that my children can be proud of one day.